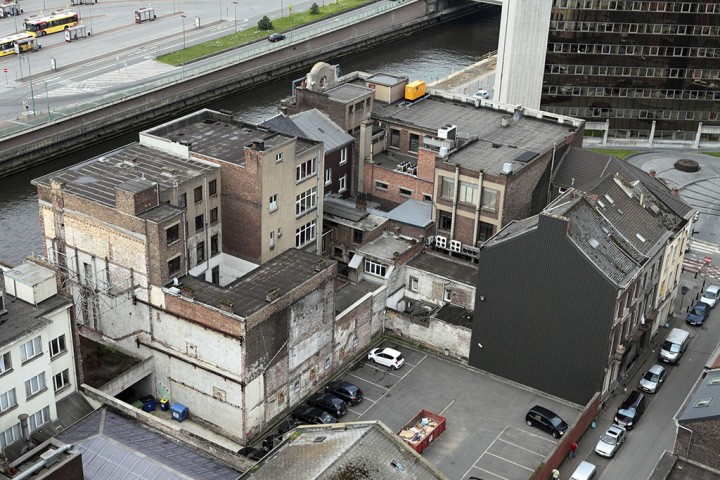 After Bernard Plossu in 2012 and Dave Anderson and Jens Olof Lasthein in 2013, Claire Chevrier is the fourth photographer to be commissioned for a “photographic mission” by the Musée de la ville, centre d’art de la Wallonie in Belgium.

The name Charleroi doesn’t call to mind coconut trees or the tropics, that’s for sure. Rather, it evokes grey skies, smokestacks and drizzles right out of one of Don McCullin’s photos of England.

To hell with prejudices! Arriving at the Charleroi station, a visitors was greeted by a shining sun in a clear blue sky. The air was crisp and the canal beside the station reflected a tangle of cranes. The historical city center is like a gigantic work site strewn with signs: Caution, For Rent, For Sale.

After decades of thriving mining, steel and glass industries, Charleroi has now sunk into a postindustrial slump, all too common across Europe.

The 20,000 workers who were once the city’s driving force now face unemployment rates near 27%! As a result, people have fled the city for the suburbs, in particular to the north of the city near the airport.

Ryanair made Charleroi Belgium’s second biggest air hub, and the “lower city” was taken over by the mafia, becoming a hotbed for trafficking of all kinds. Since then, thanks to European funding and private investment, the city is under construction.

“Let’s be clear on the nature and purpose of this project,” says Xavier Cannone, director of the Musée de la Photographie. “It’s not about making the city beautiful or turning it into something it’s not. This isn’t a travel brochure or a postcard with a blue sky and flowers on every balcony.”

On January 24, a visitor to the opening of the Claire Chevrier exhibition disagreed: “There’s nothing in these pictures. She photographed trashcans, not Charleroi!” The appeal of documentary photography was apparently lost on this local.

But Chevrier, who has previously photographed Bombay, Rio de Janeiro, Lagos and Cairo, spent weeks roaming the city to produce the thirty color photographs on display.

“I wanted to start on the outskirts of the city, to understand its structure and borders, study the neighborhoods and observe the flow,” says Chevrier. “It was important to work as much as possible outside on sunny days. I didn’t want to let the grey skies color the city or distract from its layout.”

A similar project is planned for another photographer, whose work will be exhibited during a series of cultural events in Mons in 2015.

But the future of such projects is uncertain. The Musée de la Photographie de Charleroi, like many of its fellow European cultural institutions, is suffering from cutbacks.